As a die-hard train lover, one of James' big NDIS goals was to go on more train trips and see the sights of Australia. With the support of HELP’s short-term accommodation service, James was able to visit The Downs Explorer Steam Engine and locomotive depot in Warwick.

With support worker Corey driving and James navigating, they set off to Warwick for the first of James' “must-see” train experiences.

Upon arrival in Warwick they took a sneak peek at the train station, before starting their first night with a delicious meal at a local restaurant, where James shared his passion for trains with Corey, answering all of his questions.

After a good nights’ sleep, James was keen for a jam-packed day of trains! Upon arriving at the station James went up to the footbridge to watch the workers prepare the train, listening to the whistle sound and jumping up and down excitedly as the steam from the engine rose and covered him from head to toe.  Whilst waiting for the train to leave the station James was also able to share his vast knowledge of trains with fellow enthusiasts on the trip, even meeting a former train driver. 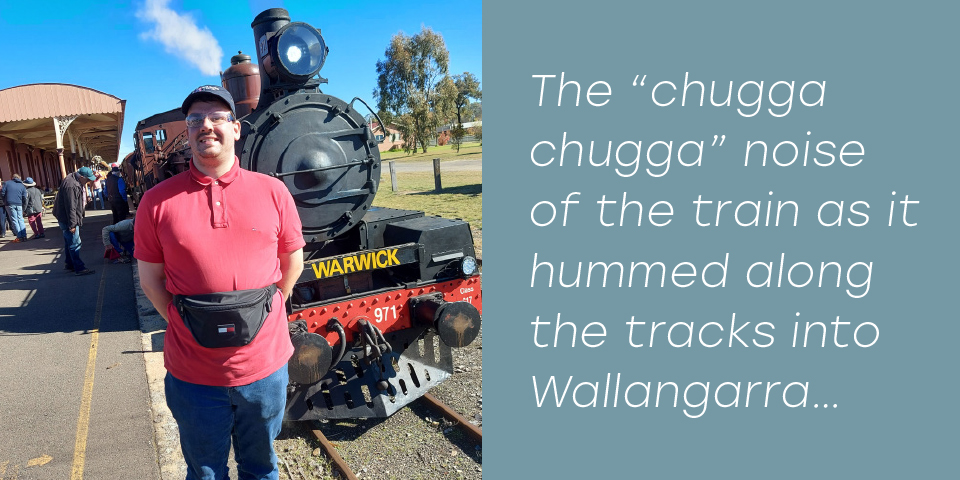 When it came time for the train to depart James made his way to the front carriage so that he could take in all the sights and sounds of the track. Corey was eager for James to have some independence, so he stayed behind in the passenger carriage as James explored the train at his own pace.

Throughout the journey James chatted with other passengers, took plenty of photos and recorded the sounds of the engine to add to his train memorabilia collection.

He even got some face-to-face time with the train driver and crew to ask questions about the train and compare notes about other famous steam engines.

Part of the experience included a stopover for lunch and a visit to the local rural fire brigade. This gave James and Corey the chance talk with the other passengers about their discoveries from the day.

With sunset quickly approaching it was time to board the train and return to Warwick station. As the trip wrapped up James thanked the crew, farewelled his fellow passengers and took a few more photos to commemorate his journey.

Excited by the experience, but weary after such a big day, James and Corey had an early night, filled no doubt, with dreams of trains trips and new experiences.

Planning the next adventure

Fuelled by a good night’s sleep and a healthy dose of country air they set off early the next day. Their two-hour drive back to Brisbane was filled with music and shared memories of their excellent adventure.

With one successful journey completed, James is already planning his next train trip: an adventure aboard the Spirit of the Outback to Longreach.