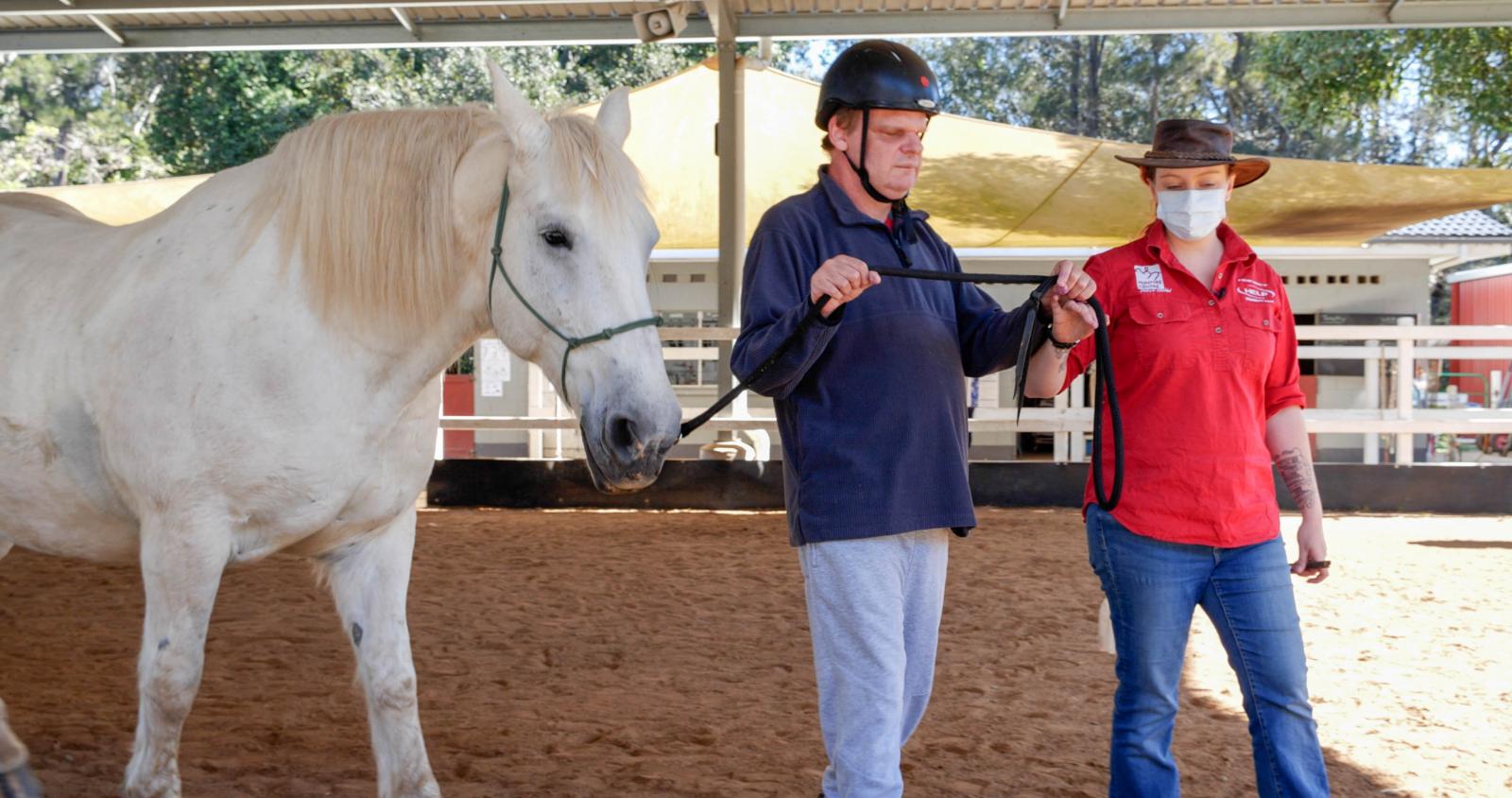 Pictured: Anthony leads a horse by the reins in the arena with Ash by his side.

Anthony first started at HELP’s McIntyre Centre a number of years ago and has been training with Equine Activities Coordinator Ash since 2019.

When Anthony initially began working with Ash his program involved repetitive tasks like leading and grooming to work on his mobility, and get used to interacting with horses (as someone with a visual impairment). However, as time went on and Anthony became more familiar with his furry counterparts, Ash was eager to introduce a new type of program that would push Anthony outside his comfort zone, and help him achieve his NDIS goals.

As independent travel was (and continues to be) one of Anthony’s main goals Ash decided to integrate more sensory elements into his program to better prepare him for activities such as catching public transport, riding in a car with his support worker, or navigating public spaces like shopping centres, cafe’s or libraries.

“The equine sensory program is all about Anthony being able to achieve his goals with alternative learning strategies – using his senses to learn new skills,” says Ash.

The sensory program encourages Anthony to participate in a range of activities including painting (using different tools like sponges and brushes to apply paint to the side of his horse), stationary barrel riding with audio cues, and groundwork focused on leading and practicing commands to manoeuvre his horse. 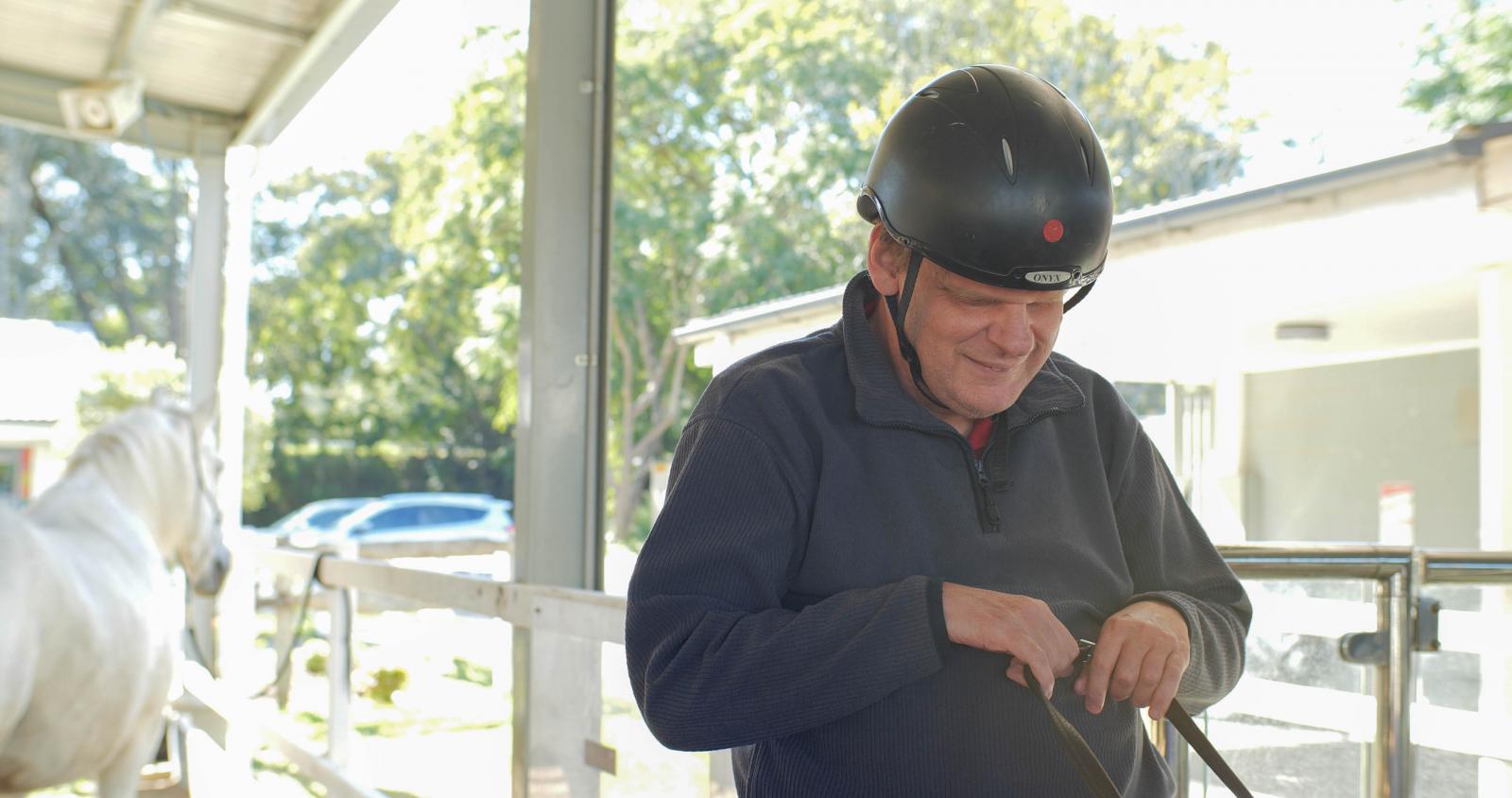 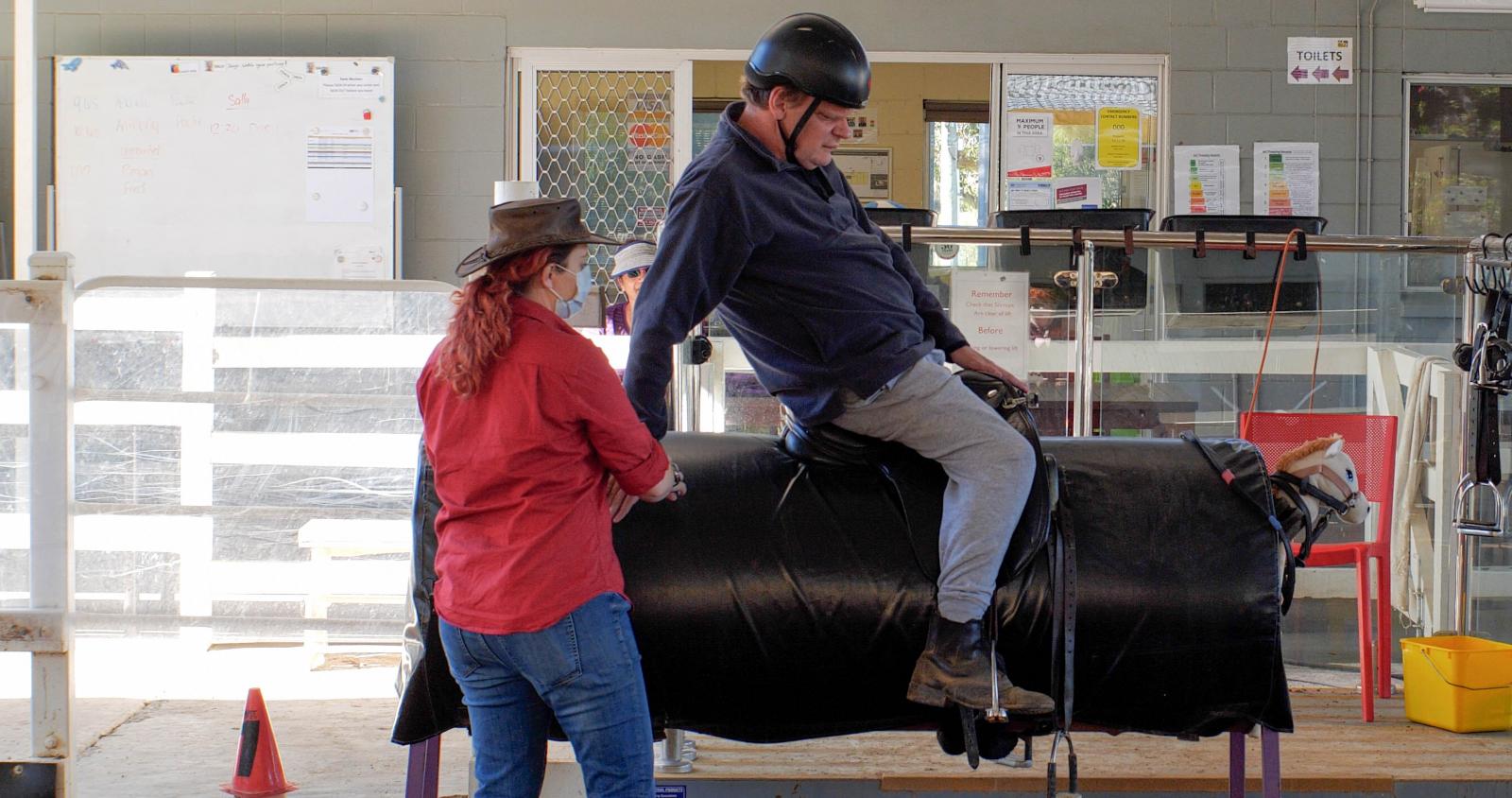 Pictured: Anthony sits on a stationary barrel and holds the reins in preparation for his barrel riding session with Ash.

Through these activities Anthony has been able to practice a range of skills that will better equip him to travel more independently, specifically, recognising audio cues, following instructions, communicating with his support worker, and identifying the texture of different surfaces and tools.

Since embarking on his new program Anthony has made impressive progress not just in terms of mobility and physical growth, but he has also improved his communication skills and ability to make decisions.

“Anthony started off mimicking a lot of what I was saying but now we give him choices and he has to make his own response. He’s more independent and able to follow through with commands. Now he (Anthony) is choosing between soft, hard, and spiky painting tools and communicating what he wants. It's not just picking anymore, it's differentiating between the options. So he's doing really well," said Ash.

“I love seeing progression and people achieving their goals. It makes me smile when I see them smile”, she said.

Anthony's support worker has also seen him reach some important milestones since participating in equine activties at McIntyre Centre.

"If it wasn't for you (Ash) and your training... seriously! To start with he had few skills, now you've got him dismounting, mounting. Oh, my goodness. It's just so exciting to watch him", said Anthony's support worker.

Watch Anthony in action as he continues to work towards his goals with Ash and his beloved steed Paulie by his side.

Enquire below to learn more about the different equine programs and therapies available at HELP’s McIntyre Centre, or visit our info page.