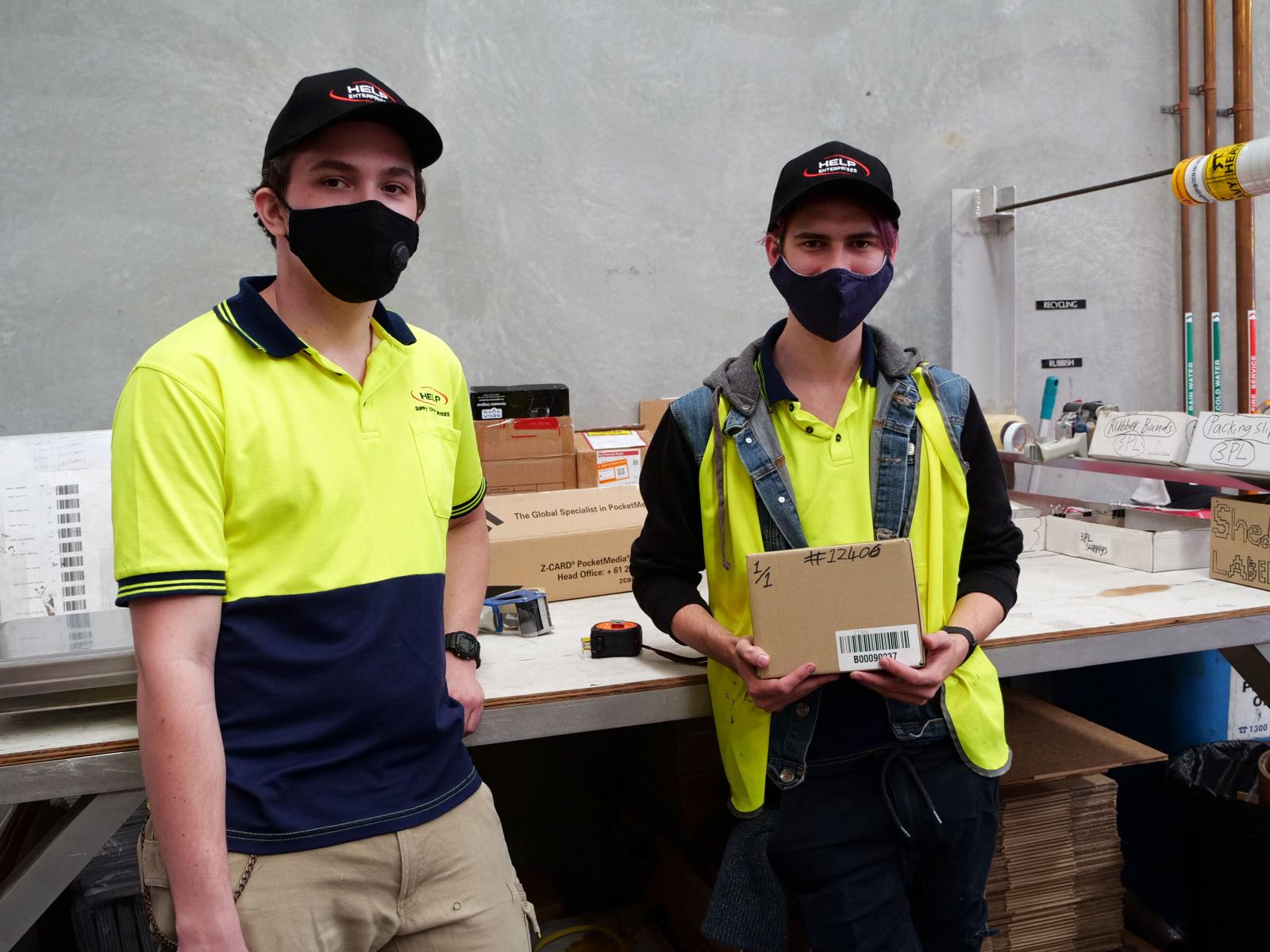 Pictured: Mitch and Nick standing at their packing station in the HELP warehouse.

Our partnership with TransLink first began in 2013 after HELP submitted a successful tender bid to store and distribute a wide range of TransLink collateral, including timetables, go card wallets, merchandise, and infrastructure such as J Poles.

Since starting in the logistics team one year ago, a big part of Nick's role has been dedicated to picking and packing orders for TransLink.

Prior to working at HELP, Nick had many jobs but none that met his needs. Nick has found that working at HELP has given him a supportive environment where he can grow and progress in his career – something he had previously considered impossible. 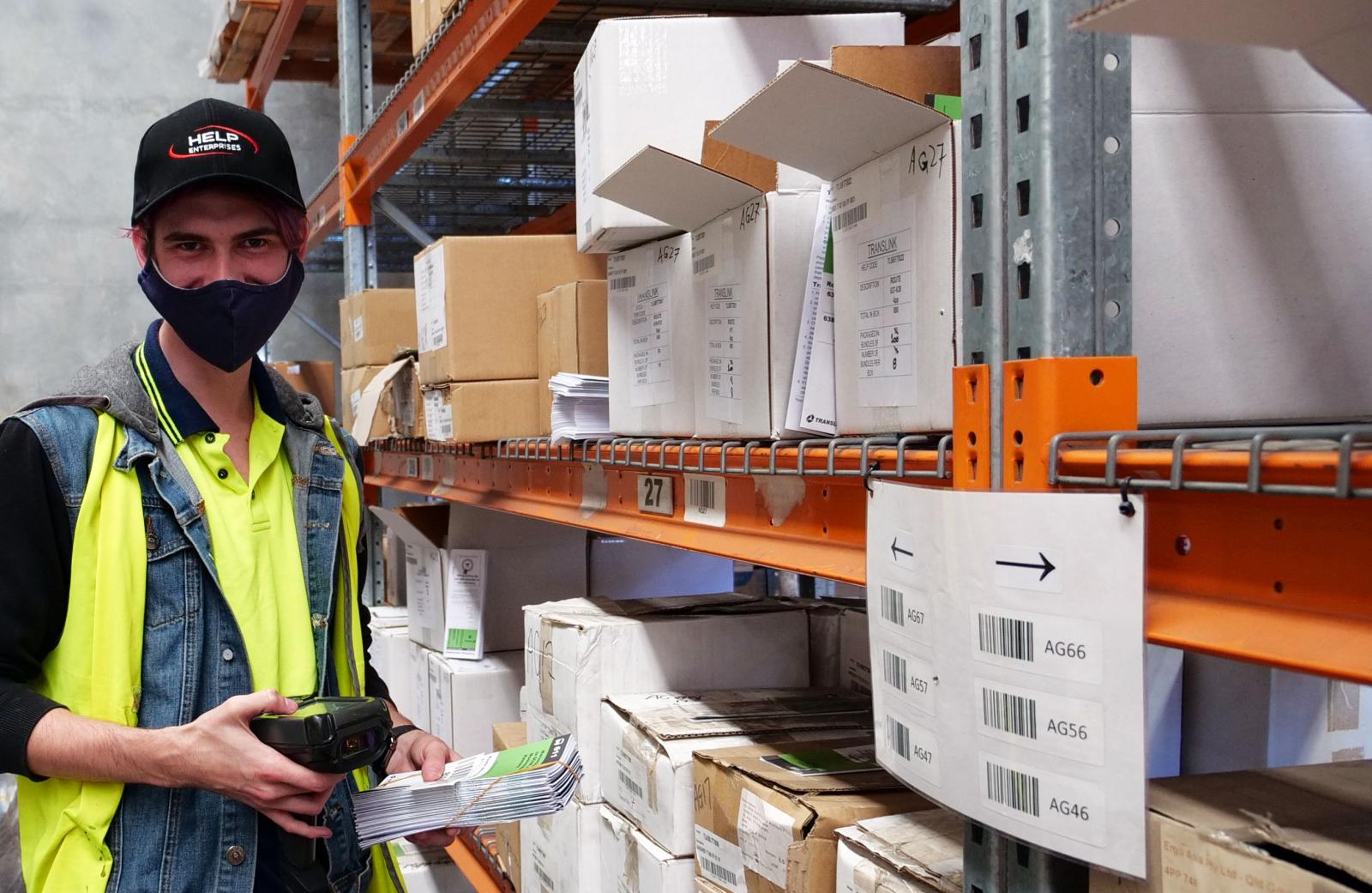 Nick began his career at HELP in the supply chain team, but it wasn’t long before he moved into logistics. He said, 'I never thought I would be able to progress so quickly in my job. It’s made me more confident and think, 'hey I can actually do stuff!'

As Nick's confidence has grown, he has been more open to sharing his ideas with the team and has also shown great initiative and leadership skills. He now helps to set weekly goals for the logistics team to guide their progress and improve processes.

Nick likes the mix of 'familiar' and 'new' tasks involved in picking and packing orders for TransLink as it gives him variety in his role. When he masters a new task, he feels calm and capable on the job – almost Zen! 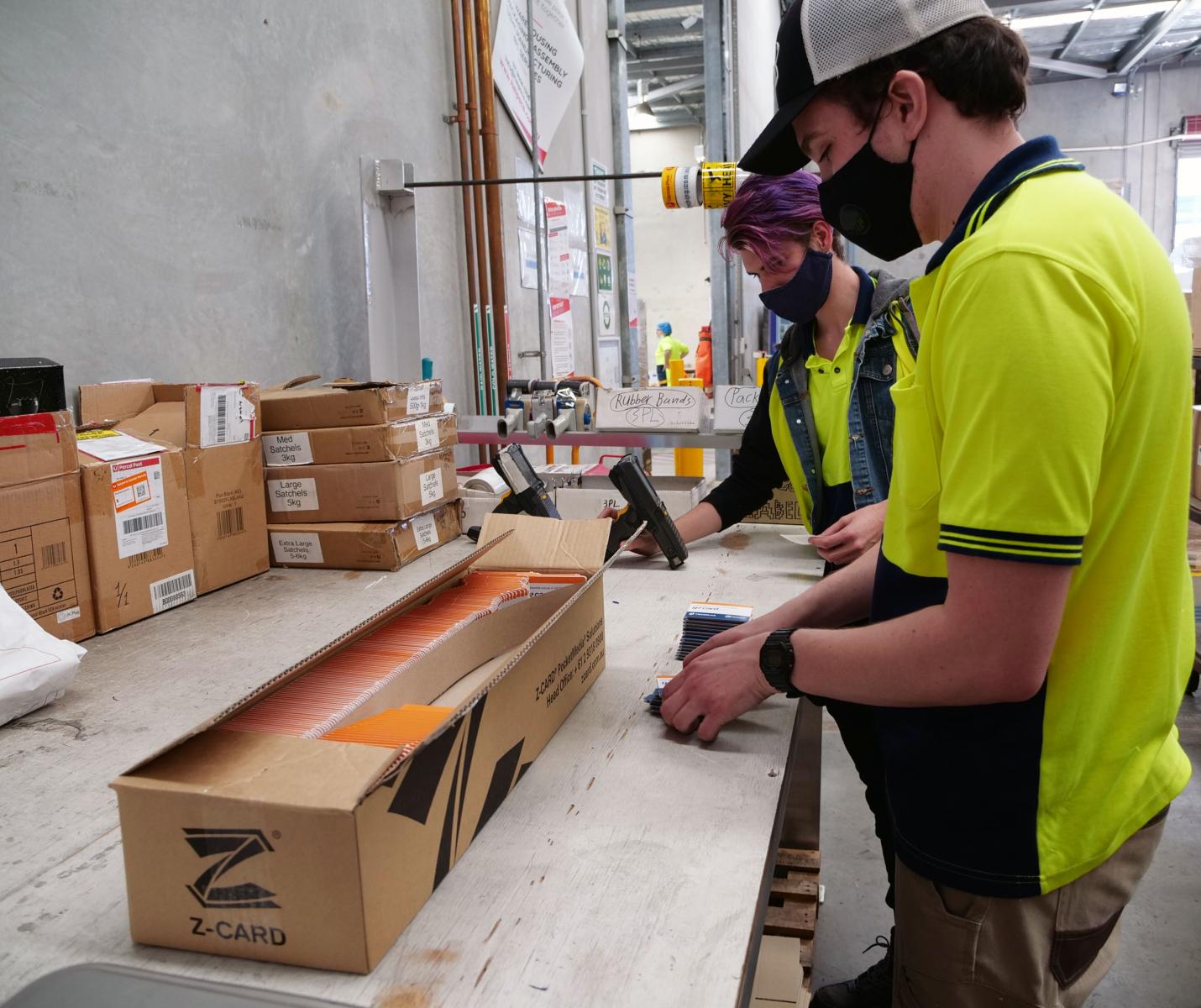 Pictured: Mitch and Nick packing TransLink bus timetables at their packing station in the HELP warehouse.

Nick’s teammate, Mitch has also played an important role in helping Nick learn the ropes, especially when it comes to doing tasks like packing timetables, using the RF scanner, and picking Z cards.

In his role, Mitch works for many clients but enjoys the consistency and challenges involved in picking and packing Translink orders.

One of his favourite parts of the job is packing J poles for bus stop signs. The poles are quite heavy and can be tricky to unpack off the pallet (it’s a two-person job), but now that Mitch has his forklift license, he can help out with the heavy lifting.

Mitch says being at HELP has given him the confidence to get out of his comfort zone and try new types of work. He feels appreciated and heard by his team and enjoys the responsibilities of his role. When Mitch sees a Z card or timetable at his local train station, he feels proud. "You get a strange sense of satisfaction just knowing that you’re the one who could’ve packed that Z card," he said.

Working side by side with Nick and other members of the logistics team has allowed Mitch to build some great friendships. He likes to crack a joke with the guys and knows that when they get a big order, they’ll band together to get the job done.

In the future, both Nick and Mitch hope to undertake different types of jobs at HELP so that they can gain more experience, and continue working towards their goals.

Want to know more? You can read the full case study on the QLD Government website.

If you'd like to support our social enterprise, and provide meaningful employment opportunities for people with disability, visit our Supply Chain Services info page.